EVERYTHING everything? That's a long story. It took me four years to tell it so far, not sure Sincato has the patience to sit still that long haha

An Alternat-Namide has dropped on Ko-Fi, since I was curious how she might accompany last week's Alternate Anrak. We're also halfway to the bonus update, and I'm currently sitting on a buffer, now's a good time to get caffeinated. (You can see those Alternates and follow me on Ko-Fi for notifications without actually donating anything, btw! Nothing on Ko-Fi requires you to toss money in the pot.)

And here are a few more comics for you to check out for SpiderForest's Comic of the Week event: 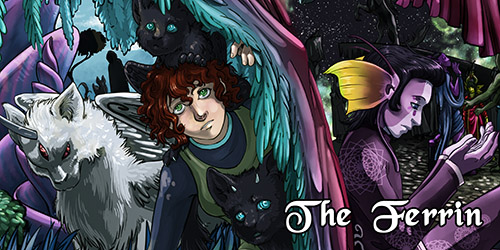 The Ferrin Elanor Standish just wanted to finish her paper on the wild Alien species, the Ferrin, not uncover secrets hidden from and by the galactic superpowers that control the current universe. YA to mature

Sunset Grill -- Gangsters. Soldiers. Public defenders. Ordinary people struggling to survive in an extraordinary future. They all have one thing in common: they all drink beer.

Cosmic FishSoon-to-be resident-snake/fish monster Acantha has rejected the childish idea of solving the mystery as to why her unusual kind exists and why they’re deemed the enemy of the planet. That may very well change when the child-like guardian (and known monster hunter) Bells believes they can work together to find peace. But both have a long way to go as they each have to face their mistakes and learn from the past to find a hopeful future.